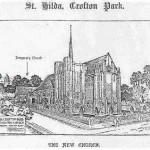 THE ORIGINAL PLAN OF THE CHURCH
Designed in 1899 by J.E. Newberry. Note the needle spire and design of the tower in contrast to the image below. 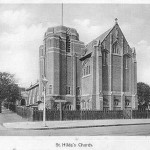 ST. HILDA’S AS COMPLETED IN 1908
Responding to a sermon, a generous lady promised an annual subscription to build a tower, however only the octagonal story could be built as foundations had only been prepared to carry the squat transept and fleche spire figured in the plan above. A plaque in the belfry warns not to hang a peal of bells for the same reason. 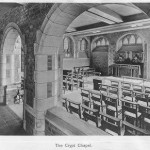 INSIDE OF THE CRYPT CHAPEL
Originally dedicated to the Good Shepherd, Refurbished and dedicated to St Cyprian in 1957. Note bare brick and stone walls. 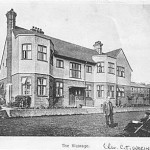 THE ORIGINAL VICARAGE
Destroyed in 1944 – The new vicarage was built on its remains to a similar plan in 1951. The bay windows no longer exist, neither the notably cold stone flagged ground floor. 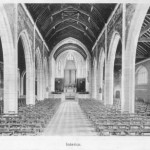 THE INTERIOR OF THE CHURCH
Note the chairs set into aisles with an extra wide walkway. At this time the walls had not be spoiled with paint. 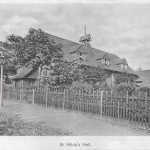 THE HALL IN 1901
The Hall was built cheaply as the temporary church. Under the current stage are the sanctuary stairs. At this time the large Sunday school wings had not been added. 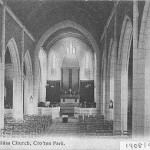 INTERIOR LOOKING EAST
Note the wall and gates of the Chancel removed in the 1959 alterations, but at the time of building fashionable and providing the two ambos for readings and preaching. (no pulpit or lecturn). 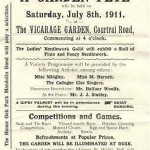 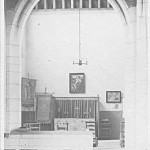 THE LADY CHAPEL – FIRST FURNISHING
At the beginning of last century dedicating a ‘Lady’ chapel could prove controversial, so the original plans show it as aa transept for pews. However it was, no doubt, intended as a chapel in honour of St Mary. Note the altar surrounded by curtains – later removed when the fashion changed. The posts are still in store. 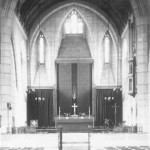 THE CHANCEL
The Chancel still lacking the fine oak choir pews we know today. The original reredos (back of the altar) of blue William Morris tapestry still exits though much faded, as do the ‘Arts and Crafts’ Cross and candlestcks – though now used elsewhere.