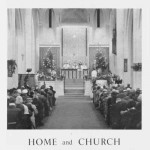 CHRISTMAS SOME TIME IN THE 1960s
The Eucharist had become the principal Sunday service by this time. Note the high Altar has been pulled forward and the clergy are wearing Eucharisting vestments. 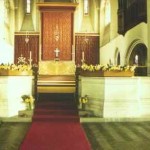 EASTER SOME TIME IN THE 1970s
Note the Golden Jubilee Red Hangings and Eagle Lecturn to the right, which stands in front of the south Ambo and was the place originally intended for readings. 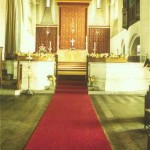 AS ABOVE FROM THE MID NAVE
The new central dorsal hanging was made without the central stripe of the earlier design. Consequently a certain sense of movement and proportion has been lost in the chancel.
A new white frontal has supplemented the earlier ivory one and though an exiting design, in good modern embroidery, it lacks a certain sense of celebration.