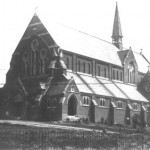 Built in 1901 in Adelaide Road (Avenue), opposite Hilly Fields on the site of 104-120 Adelaide Road. From 1921 the Vicar ws Fr. Thorley Hurst and when the Church was bombed on 6th September 1940, it was understood that Fr. Hurst and his verger, Mr. Cooper were rescued from the basement (boiler room) where they had taken refuge. In addition to the suffering caused to Fr. Hurst at the loss of his Church, it also became known that he 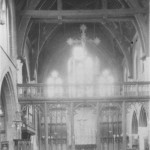 had personal suffering which lasted with him for the rest of his life.

After the Church was destroyed, services were held in part of the Church Hall, facing Adelaide Road, which had been adapted to form a chapel, and thus it continued until Fr. Hurst death in about 1958/9, when the parish was declared redundant and divided between St. Hilda’s, St. Peter’s and St. Mary’s, St. Hilda’s being 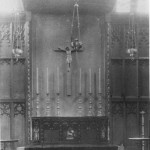 allocated the largest part, together with the Title, the Hall and No.1 Braxfield Road.

In 1960 it was decided to hold a door-to-door visitation of the part allocated to us, which took several months to complete and was indeed most revealing!! Communion Services, Family Services and a Sunday School were started at the Chapel, the latter drawing many children from the new flats in Whitbread, Comerford and Ivy Roads, but being council flats the tenants were frequently moved on and gradually as the older members of the congregation died, St. Cyprian’s Chapel slowly declined by about 1972/3. Some of the older members also moved away from the district during this period.

The Hall and 1 Braxfield Road were eventually acquired by St. Mary Magdalen Church who retained the name in their new title.

At St. Hilda’s, we have named our crypt chapel SAINT CYPRIAN’S CHAPEL in order to perpetuate the memory of that beautiful Church (inside) which for 40 years had stood in Adelaide Avenue, as it is now called.

The site of St. Cyprian’s is now occupied by the new Prendergast School buildings, and it is interesting to note – and to me personally with great joy – that the slipway leading into Ivy Road, after so many years, has now been allocated a name – St. Cyprian’s Passage. This, I might add, is the North-east corner of our present parish boundary.

I had the privilege, for quite a while, of taking the Family Services on Sunday mornings, and with Mr. Atkins, of being involved with Sunday School which was attended in St. Cyprian’s Chapel, and which lasted for a number of years.